Our Ladyfest stems from a grassroots history. The first one took place in Olympia, WA in 2000. It was a 5-day festival that raised over $30,000 for local women’s projects/organizations–over 2,000 people came out to be a part of it. At the end of the festival, the organizers encouraged all of the attendees to go organize Ladyfests in their own towns. Now, Ladyfest has happened all over the world from New Orleans to New Zealand, with each festival focusing on specific local needs. Fifteen years later, a fierce team of volunteers banded together and formed the first ever Ladyfest Atlanta*, a multi-venue event hosted by Mammal Gallery, Eyedrum, Broad Street Visitors Center, and The Big House On Ponce which took place the weekend of March 20-22, 2015. 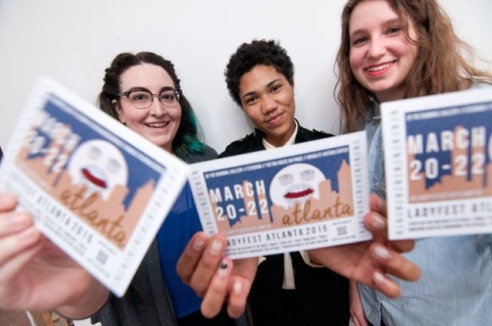 The first Ladyfest Atlanta featured over 60 local artists and, through donation at the festival, raised over $1,300 for the SNaP Coalition.

Our second year was a six-day festival in May that opened with a gallery exhibition and discussion around HIV decriminalization at Murmur. We were also able to raise a sizable donation for Georgia Equality’s Youth HIV Policy Advisors’ Program. 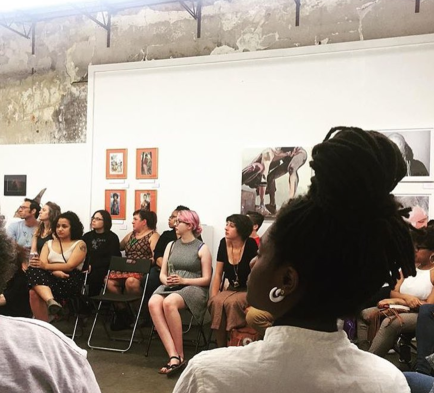 In 2016 we hosted a live Stuff Mom Never Told You podcast with guest Andi Zeisler, co-founder of Bitch Magazine. Sponsored by the Atlanta Film Society, we screened the documentary Trapped at The Plaza Theatre. The film follows the struggles abortion care providers go through to keep up with lawmakers attempts to shut them down. In addition to Trapped, we also screened a selection of shorts by local filmmakers on the rooftop of Eyedrum. 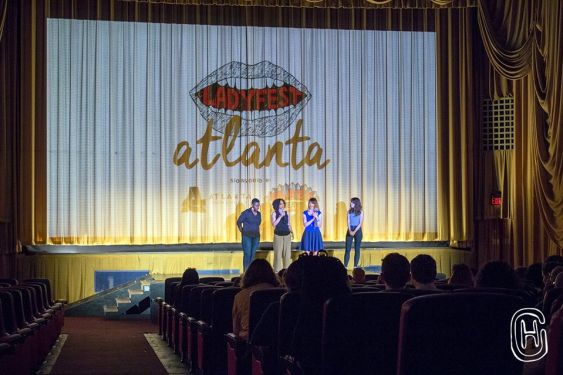 WHAT LADYFEST IS (AND ISN’T)

Many women’s festivals fail to address the politics that make these spaces necessary in the first place, but Ladyfest Atlanta seeks to create an outwardly political space where dialogue and activism are just as important as art and music. We also wish to acknowledge how “female only” and feminist spaces have historically excluded or erased the contributions of trans-women, people of color and those living under the poverty line. We cannot re-write history, but we believe our action and vision can aid in community healing and shape a more powerful, intersectional feminist future.

There is certainly no shortage of women, trans and nonbinary people doing impressive and important things all over this city. Unfortunately, many spaces dedicated to art and music around Atlanta primarily serve and exhibit men’s works. In addition to highlighting amazing talent in our city, our goal is to precipitate critical and needed dialogue around the intersections of sexism, racism and classism in the arts communities of Atlanta. Not only do we encourage artists to explore these issues, we also partner with local organizations in order to increase awareness of the work that is already being done. Connecting Atlanta arts (both institutional and DIY) and Atlanta activists is a crucial step in shifting the cultural landscape to make space for radical, local change.

All events are always free, open to the public, and we welcome everyone to attend and join the conversation! Visit our Facebook page to see what we’re up to now.

*Atlanta has hosted Ladyfests in 2002, 2004, and 2007 under the name Ladyfest South. However, 2015 was the first Ladyfest Atlanta, exclusively featuring local artists.